The ride today took me through more desert, although the views were magnificent to the East, where the huge snow covered mountain range, stretched along the Kazakhstan/Chinese border. 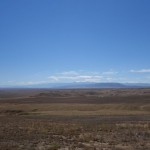 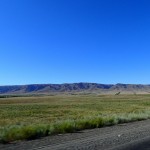 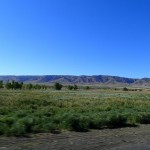 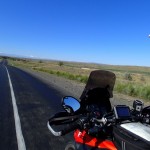 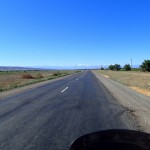 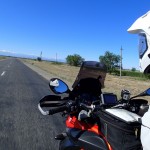 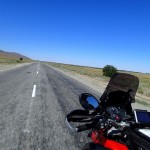 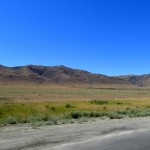 I rode into Taldykorgan just on lunchtime. The first three hotels I tried were nice, but way beyond the budget. I spotted what looked like a family hotel, and was greeted warmly with “assalamu aleykum” as I rode into the driveway.  The hotel was clean and basic, and I checked in and had photos with all the staff.   I was given very confident assurances that my bike would be watched with hawk eyes.

First, a guy looked through my passport, he was just curious at all the stamps, but after 5 minutes of checking, he told me to go away and come back in 15 minutes.  I walked outside, decided it was too hot to walk around, so went back and waited in the lobby.  Two minutes later, he told me I could go to the third door on the right.
In that room were four women working on computers.  The oldest one yelled something at me in Russian, then yelled it again when I didn’t respond quickly enough.  I handed over my passport and explained I wanted to “registratseeahh”. She seemed to understand that, and took my passport away for about 20 minutes while they did something on the computer.  She returned with her phone, and handed it to me.  There was a guy on the end of the phone who spoke English, and asked where I was staying.  With that confirmed, she went away again for 10 minutes and returned again, handing my passport back and another girl used Google translate on my phone, to tell me I had to go back to the hotel, to collect a letter confirming that I stay there, and bring that letter back to them.  I checked with them if I brought the letter back today, could the passport be stamped?  The answer was yes.  I also had them confirm I could bring the letter in before 5pm, when they closed.

I walked the ten minutes back to the hotel, where the owner was writing up the said letter.  The ОВИР had obviously called the hotel while I was walking.

With the letter in my hand I paced back to the ОВИР, and was stopped by the uniform at the gate.  “No! Closed!” Was his greeting.  It was only 4pm, so I knew this was bullshit.  I showed him the letter, and told him the lady had asked me to bring it now.  He was firm “Closed!”. And pointed to the door which was now closed.   Frustrated, I typed into Google translate “the lady told me to bring this letter here now”, and handed him the phone.
He shrugged, rolled his eyes and said “Go!”  The office was obviously open all along, I’m not sure if it was a ruse for some cash, or just classic bureaucracy.  But I walked into the office, and all the ladies were still there.
I handed over the letter, and the head lady walked out with my passport.  5 minutes later she returned and sat playing with her phone. Finally she stood up and said “Luka!”   I walked over, she handed me the stamped passport, and I was finally free to go, now registered in Kazakhstan.  2hrs out of the day for useless bureaucracy, but at least it was done.  Kazakhstan is supposed to be the least bureaucratic of all the ‘Stans’. 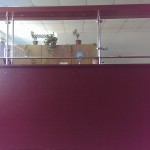 Back at the hotel, I had a nap. The 4hrs sleep clearly wasn’t enough last night. Between the nightclub closing at 1am and sunrise with no curtains in the room, there wasn’t much time for a proper rest. 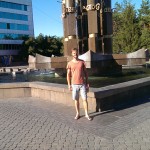 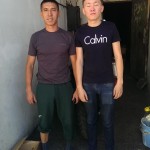 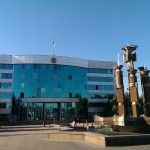 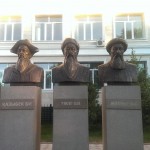 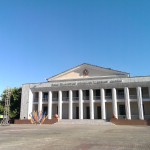 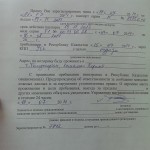