An early start from Luang Namtha, saw us head to the border at 7am. I’ve now joined up with Mick, who is also riding across China with me.
Exiting Laos was fairly straightforward and only took a few minutes to hand in customs forms and stamp out of Laos.
Two more minutes riding across no-mans-land and we were standing at the Chinese immigration building. I sent a quick SMS to our fixer, Ken from NAVO, and he soon appeared to guide us through the process of importing a foreign vehicle into China. The sign at the front of the building indicated it would be a many step process, but Ken had us fill in two short forms, and then passports were stamped and we were welcomed to China.
We were then guided to a vehicle checkpoint, before a further 40km ride to the town of Mengla for vehicle inspection, Chinese registration and Chinese drivers licences. 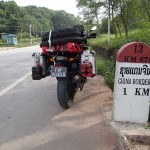 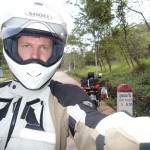 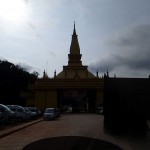 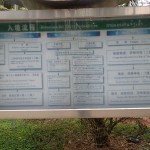 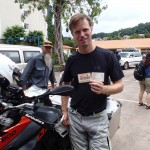 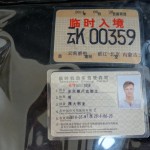 The road to Mengla was magnificent, perfectly built and a huge change from Lao roads. The scenery was also excellent, with many tree covered mountains.
On arriving at the vehicle inspection depot in Mengla, Ken ran off to sort out documentation while we waited and had photos taken with spectators. At 11:30am the office closed for 2.5hrs while everyone went to lunch. We were concerned that we would need to wait for the office to reopen, but Ken appeared with our Chinese vehicle registration and my Chinese drivers licence. We were now cleared to ride on Chinese roads.

We took a break in the restaurant next door for lunch together with our guide vehicle driver, Mr Neo. Ken took me out to the kitchen to do the ordering, as the restaurant had no menu. You just walk out the back, look in the fridge and tell them what you want and in a few minutes your selection of dishes appears at the table. It was a nice meal. 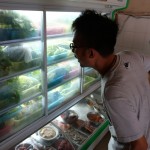 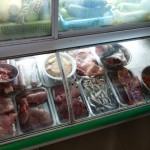 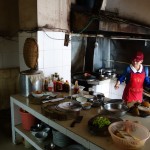 We hit the road further north, and China turned on a brilliant day to greet us, with a blue sky and pleasant temperatures.
The road weaved through the mountains, sometimes passing under them, through long motorway tunnels. I rode through more than 20km underground today, the longest individual tunnel was 5.3km long, but with no lighting and little ventilation, the inside of the tunnels were not much fun. I took a photo that shows just how heavy the particulates were inside the tunnel. It looked like snow, but far more noxious. 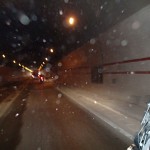 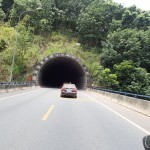 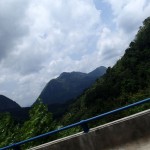 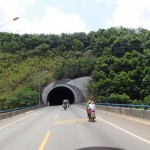 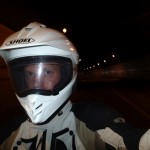 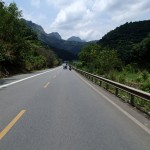 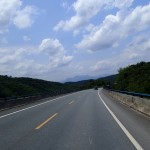 On arriving in the town of Jinghong, the sky darkened and it started to rain, just as Ken found us a strange hotel which appeared to be an unfinished apartment building. The corridors were littered with building materials, but the rooms themselves appeared nice, so we checked in. Of course, after we had checked in I found that there was no running cold water, only hot. And the wifi, while it worked, was not connected to the Internet, making it useless. The hotel said, maybe the cold water would be turned on after 7pm. I have my doubts the cold water will materialise. There was a big bucket in the bathroom, so I filled it with hot water and let it cool to be able to wash. On the floor above there is a regular jackhammering, that we have been assured will stop after 5pm. The bed is super soft, a big change from the stone hard beds of Laos. The supplied toilet roll is pretty short, you wouldn’t want to be staying for two many days. 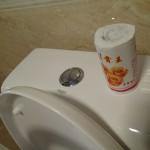 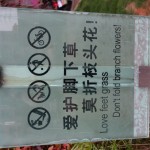 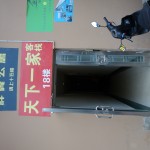 The town is fairly non-descipt, although there is a large minority population here, so alot of the signage is in both Chinese and the local minority language, which looks similar to Burmese script.

Tonight we will go to dinner and a briefing with Ken and Neo, to discuss the plan for the next 32 days. 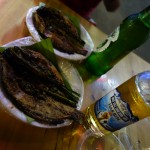