It was to be a very short ride today, down to the port at Holyhead, and onto the ferry to Dublin. 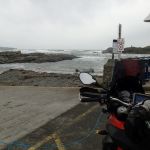 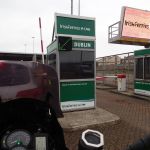 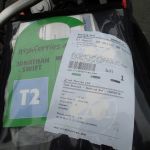 On board the ferry, with the bike strapped down at three points in preparation for the crossing, I found a seat and settled in. There was a savage wind blowing force 8, and the captain made an announcement in advance of our departure, warning that it would be a rough ride, for at least the first hour.

Not long after leaving, children started crying and adults turned green. Me included. It was particularly unpleasant. The boat had plenty of seasick bags available, and staff replenishing them. Fortunately I didn’t chunder myself, but felt atrocious for almost the entire 3hr journey.

On arriving in Dublin, I rode into temple bar, parked on the footpath and stuffed my face with a burrito. I felt much better after that, and located a guest house for the night, before taking a stroll around town and eating some traditional Irish fare, soda bread, Shepards pie. A good feed. 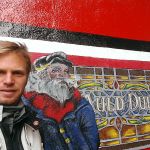