The rain storm that passed over Beijing yesterday, made a tremendous improvement Beijing’s air quality.   Gone was the humid, grey, choking pollution haze and I awoke to beautiful clear blue skies and cool air.

Being Saturday morning, traffic was light apart from a large number of cyclists in lycra, also out enjoying the clean morning air.

The first hour was spent exiting the city, then the next hour riding some fabulous hills and twisty mountain passes, until I reached a complete dogs-breakfast of road maintenance.     A small section of road had been ripped up by one guy with a jackhammer, while 12 other guys watched on.  This had closed one lane of the road, and the cars and trucks were doing their usual thing of everyone trying to go in opposing directions at the same time.  Just like people getting on and off the MRT in Singapore.   The magnifying factor in this case was the hundreds of trucks.  Literally hundreds of them, backed up for kilometres.  I weaved the bike through semi-trailers and was able to bypass alot of the mess, and waited for the guide to catch up under the shade of a tree. 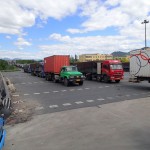 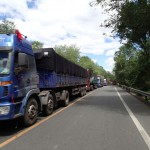 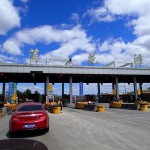 After lunch it was back on the road and following the dusty coal trucks again, breathing in coal dust and coughing it back up in my helmet.   Finally the trucks headed off in a different direction and the road was clear as I approached the border between Hebei province and Inner Mongolia province.  The bike felt like a completely new machine, with the new chain, sprockets and tyres, it is now much smoother & quieter, so much so that I started to feel drowsy and was nodding off.  I stopped in a small town for a Red Bull and a water, and a little chat with the locals who had never seen such a bike before. 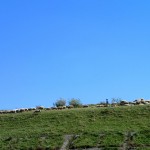 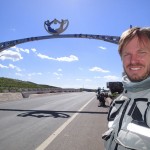 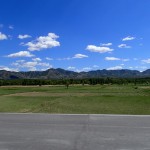 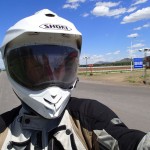 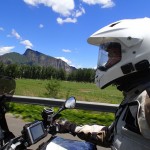 The Inner Mongolia landscape has really opened up now.  The sky is huge, grass plains and small rocky hills cover the horizon and the distances between towns has lengthened.  It feels good to be in the countryside again at last.  Bugs now splatter the bike, the last time I felt like this in the countryside was back in Laos, 4000km ago.  China is so developed, a network of towns, cities and metropolises connected by roads for thousands of kilometres, it rarely feels like anywhere is far from the next cluster of factories, office blocks, apartments and car repair workshops.   Finally there is some space now in Inner Mongolia, and I’m enjoying it.

Tonight I’m spending my second last night in China in the town of Ulanqab, before riding the last 300km to the border to Mongolia. Ulanqab like so many other Chinese towns, has thousands of completed, but unoccupied apartments, and still more apartments under construction. According to the man at the petrol station, the government has run out of money to finish some of them.  The number of new, empty buildings is astounding.  It is like someone was given a new, massive, unlimited piece Lego set, and just went crazy building things, but there are no people to live in them.   A city in the middle of nowhere, with no people.  I asked the owner of a restaurant what industry was here, thinking that perhaps there is a mine or something large that would require a huge number of workers. He said there was no industry, just trucks passing through.  I wonder if the Chinese growth story is really all it has been hyped up to be? 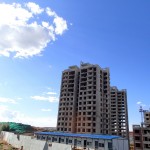 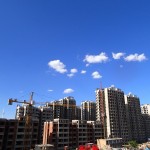 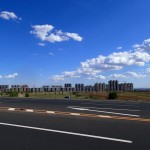