It was raining and cool as I left Oskemen in the morning, stopping briefly to see the mosque and fill up with fuel.  The target destination for the day was Ayagoz, about 300km south. 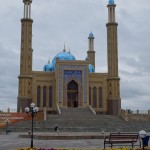 The road was atrocious, the tar surface giving the appearance it was suitable for fast speeds, but random potholes, some huge and very deep would appear frequently.  Worse still were the strange upside down speedhumps that had formed in the road, every few meters there was a sharp dip, that shook both me and the bike apart.  They were almost like tar corrugrations, except they were spaced just far enough apart that no speed worked to diminish the impacts.   I thought the suspension on the bike had died, it was that bad. Over 200km of this road, shook one of the headlights loose. 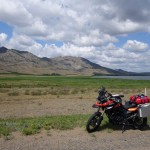 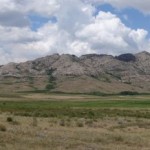 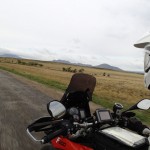 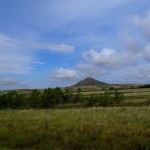 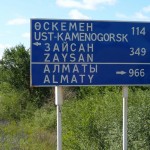 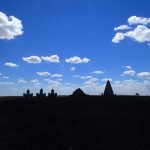 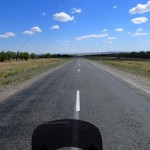 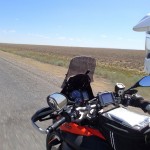 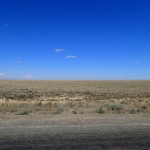 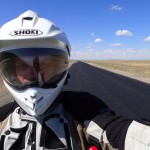 I stopped in Ayagoz for lunch and was looked after by a lovely family who watched over my bike and gear while I ate.  They offered a room in their house for the night, but I’d already decided to push on further as it was still early.  I tried to register my visa at the OVIR (ОВИР) office, but the guys there told me to come back at 3pm, after lunch break.  So I hit the road again, heading further south.

The scenery was desert for most of the day, with the exception of a lake where there was a large locust storm.  I slowed down to walking pace to pass through them, as I know from riding in Australia that hitting these huge guys at speed is both messy and painful.  I still ended up with a few stuck in my visor and had to stop to set them free. 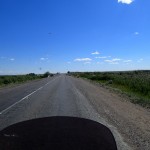 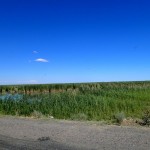 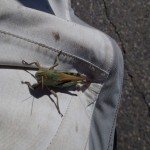 Strangely there were no graziers or stock, no people at all.

I reached Usharal at around 5pm, having covered 540km in a long day. The culture is far more Kazakh here, compared to the north where it was still very Russian.  The people are amazingly friendly, I’ve been getting waves and handshakes all day from everyone.

Kazakhstan is nothing like what Borat portrayed, and he did a huge disservice to the country of Kazakhstan. If he had done the same to my country, I’d be truly angry.   Kazhkstan cities & towns are a fantastic multicultural blend of people, who are welcoming, happy, intelligent & friendly.  Forget the old central Asia stereotypes. Sure there is still bits of aging Soviet beurocracy, but Kazakhstan is really coming together, it’s a very cool place.

I spent the early evening planning where to ride tomorrow, but there is a nightclub, right next to my window. 4ft away, which is where I parked my bike. I’ve parked in a lobby, a kitchen and a nightclub on this journey, who knows what next. So I’ve put my best crushed dirty shirt on, and I’m going to join the party. 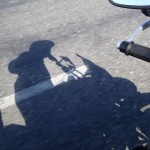 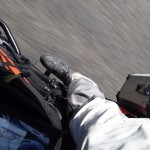 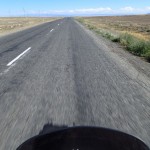