I did not need to wonder for long, what the streets of Stung Treng would be like in the wet season.  It rained overnight, turning the streets into a stinking, muddy quagmire.  Navigating out of town was a slip sliding affair, I was watching the 150cc Honda Dreams in-front of me as they skated left and right, fishtailing up the streets, knowing that in a few seconds it would be my turn.  The slightest twitch of the throttle and it would be an unintentional 360 degree turn and end up on my ass in the mud.

I made it through unscathed to find that I had gone the wrong way, and had to turn around and do the whole muddy section again.

Forty minutes later and I was at the border of Cambodia-Laos.  I was directed to go and see customs, which I had been hoping I could avoid, as I had no documents to show them that the bike had ever even been imported.   After a heartfelt hello (from me, and nothing in response from him) I handed over the Singapore bike registration papers and my passport to the customs guy.   He reviewed them quickly and then said the dreaded word “Carnet”  And showed me a sample of the last vehicle that came through.   I explained I didn’t have a carnet and fluffed up an explanation that we use this registration document in Singapore.   He then moved onto my passport, and spotting the Russian visa, stared at that page for at least a minute.  I’m not sure why, maybe he was interested in the Cyrillic text?   Eventually, he handed both documents back to me and said “Ok, you go stamp out passport”

Over on the Laos side, I needed a visa.  There was a beautiful new Laos immigration building that was complete, and apparently has been for years, but goes unused.  The immigration office is actually two old train carriages, painted blue and complete with a few girly calendars advertising booze on the walls. 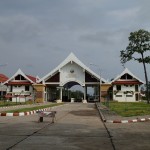 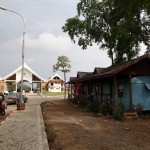 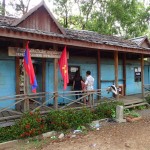 I went to the “Visa on Arrival” window where a was asked me “Do you need a visa?”  “Yes” of course being my response.  His answer was “ohhhh, problem.  Wait until 9:30am.  Man not here”     It was only 8am, this was going to be a long wait, but after 15 minutes, the visa man arrived, gumpy.  I filled in all the forms, paid the official amount of $30USD for the visa and was told to go to window number 2.  I went there, and waited, and waited, and then waited a bit more, while other Cambodian’s crossing the border somehow skipped me and had their passports stamped. Eventually, once there was no-one around, the sting.  Mr Immigration called out, “Hey mister you pay $2 for stamping, today holiday”   I thought, fair enough, $2 is not too bad and I ponyed up the cash and immediately had the stamped passport back in my hands. 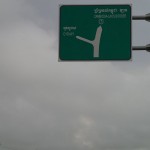 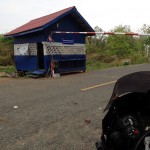 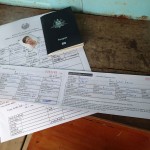 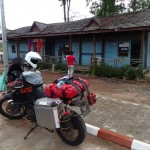 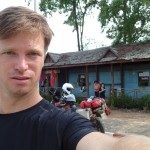 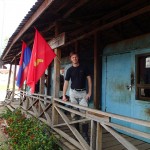 And with that I was able to enter Laos.   Riding down to the customs office, the customs official took my registration document and started typing up the entry documentation on his computer.  After a few minutes, he looked up and asked “You have bike passport, carnet?”   I said no and repeated the earlier line of “In Singapore we use this document”   He said “Ok, no problem, you can go then”   Happy days!
Lao roads beckoned. 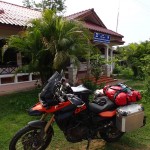 Not far from the border I took a small diversion to see Khone Phapheng, where the Mekong river drops amongst rocks to form the largest waterfall in South East Asia (by water volume)   It is a seriously impressive sight. 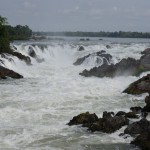 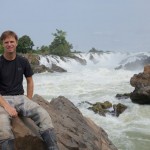 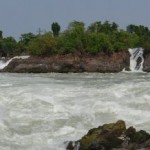 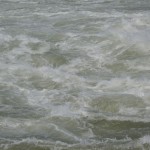 I moved onto Si Phan Don, known as 4000 islands in the Mekong river.  I choose the quieter island of Don Khong and paid the 5000 kip for the car ferry across to the island.  Although as I rode down to the dirt bank where there ferries depart, a guy gestured to me that I should ride onto his canoe.  The boat was three canoes lashed together with a small timber platform for bikes. There was one scooter on the ‘vessel’ already and I rode on next to him as everyone took a deep breath as the thing rocked under the weight of my bike.   It barely fit on the timber platform with only a few centimetres to spare.    And with that the boat engine was started and we swayed away from the shore.  I wanted to get a few photos, but the boatman said I should hold on firmly to the bike!  I’m still not sure how that was going to help, if the bike was going to move I was going into the Mekong with it!  It was a nervous ride, especially with the waves caused by other boats.   When we reached the other side, the boatman asked me to pay 20,000 kip!  I explained I had already paid, and I had the ticket to prove it.  Showing him the ticket, it all became apparent, I had paid for the proper car ferry, not the canoe.  And then he was going to try and milk me for 20,000!   I think he was just as nervous as I, after realising how heavy the bike was and we were both keen to get me and the bike off the canoes.   As soon as the boat was near the shore, he indicated I could just go and I gassed it off the planks and onto the shore. Relived. 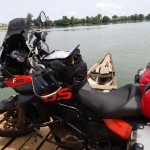 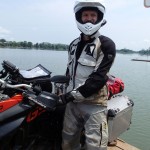 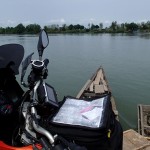 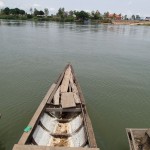 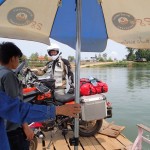 Don Khong is a lovely little quiet island and it was great fun exploring the island.  It being Lao New Year, there were little parties going on in peoples front yards.  Plenty of dancing and drinking and general merriment.  The kids were also out, lining the roads with iced water, water-pistols and buckets, ready to douse anyone passing by.  I managed to escape the first group, but took a direct hit by one little kid in the second group with a bucket of icy water. 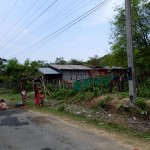 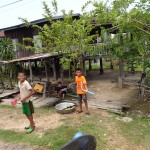 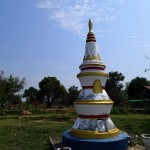 It is beautiful here, sitting by the bank, overlooking the Mekong and the distant hills with a nice cold beer to end the day. 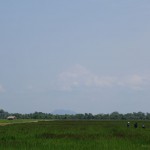 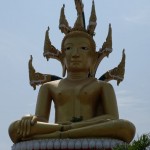 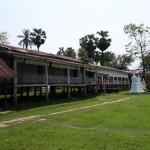 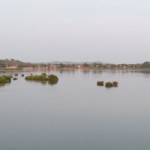 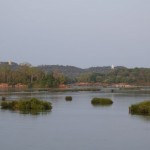 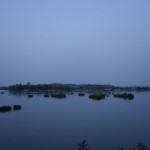 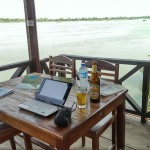