Heading out of Sofia, I thought I would ride past the Alexander Nevsky Cathedral again, just to get a photo from the other side of the building.   On approach I noticed that the road had been blocked off by Police, but one or two cars had been sneaking through, and I tried the same.   Of course, I was pulled over.

The cop made me stop, told me off and that I shouldn’t ride around the sign in the middle of the road (at least that’s what I thought he was saying) but then another car drove through.  He pulled that car over also, and I watched what happened.  The lady driving smiled at him, batted her eyelids and generally played up to him.  Of course, he let her go.   When I came back to me, I asked him “Why do you want to give me a ticket, but you let her go?”   He said “She Big Boss!”  and gestured to indicate ‘large breasts’   I laughed and said, “well then you have to let me go then”   He was insistent, I was getting a ticket.

Fortunately another cop appeared who spoke excellent English, and asked me where I was from.  When I told him, he asked incredulously, “And you rode this bike here?!!”   When I explained, yes, and showed them the flags they both became very animated, and asked me if they could take my photo.   Of course, I obliged.   After giving me very clear directions on how to exit the city, we waved goodbye and I was sent on my way with warm wishes for a safe journey, and no infringement ticket.  I also got my photo. 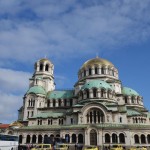 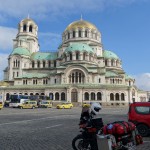 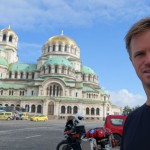 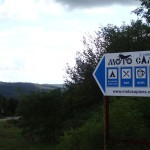 I made good time and arrived in the afternoon at Motocamp Bulgaria, where they had a spotless room for me, wifi, and cold beer in the fridge.  An absolutely top spot in Bulgaria, they made me right at home in the small village of Idilevo and I settled in for an easy evening of updating blog, scanning maps and planning routes.