As I left the hotel early, mist covered the hills and road, it was a cool 5℃, and the road wet. I followed the gps, which had me turning down small lanes and through villages where ducks wandered the lanes and the occasional pig appeared confused from the bushes. 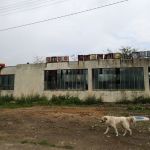 The lanes became smaller, and the trail turned to dirt. But no drama, and I powered on. I should have realised the track was degrading, but fell into the common trap, thinking, it’s just a small muddy puddle, the trail will get better around the corner… It was starting to get slippery in the mud, and as I ascended the mountain, the trail winding up the hillside, I thought to myself, “if I need to come back down this, it’s going to be one hairy ride….”

Then I reached a steep and completely muddy hill climb, rutted clay all the way up. There were two options, but both looked equally challenging. I didn’t hesitate, and took the right trail. Powering up the hill, wheels in the rut. I made it more than 50% of the way up before the tyres were caked with mud, and with no grip, the rear wheel spinning, I started to slide backward. It was game over.
I deliberately stalled the bike, stopping my slide and took a deep breath. This was going to be tricky and messy to get out of. I restarted the bike and tried to climb again, but there was no chance of ascending any further. The rear wheel just spinning madly, and I was getting covered in mud. 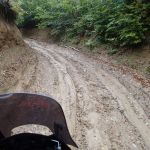 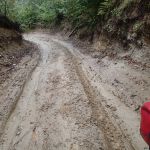 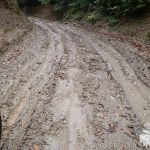 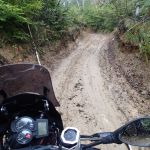 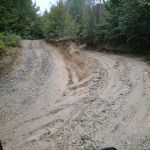 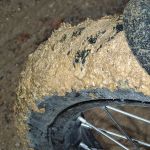 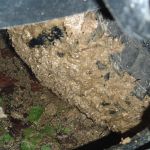 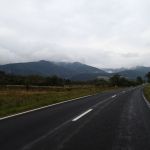 I decided to try and back out. Turning around was impossible without laying the bike down. And once down in this mud, there was little chance I’d ever pick it up again. I started slowly walking the bike backwards down the hill, using the clutch to moderate and stop occasionally for a breather. It took about 10 minutes to get back down to a point where I could turn around.
Then I had to ride back down the very section I’d dreaded earlier… Slippery as a greased piglet, I worked hard to stay upright, sliding down the hill.
Finally I reached level ground and retraced my path back to the town, where I found a proper road, a longer route, but ridable in this rain.

I passed many old churches in each village, amazing old buildings. Finally reaching the border as a huge rainstorm passed through.

With border formalities completed, I was now in Serbia. 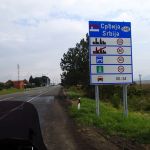 Serbia is much more developed and wealthy than its Romanian neighbour, even in the farming villages, that is evident with the cars and farm machinery. In the town of Vršac, I found a very nice little apartment for rent, where I could park in the courtyard. The owner welcoming me with a glass of palinka, after a long day without a meal, it went straight to my head. I took a walk around town, located a brilliant Serbian restaurant in the suburbs and feasted on roast pork and a few glasses of local red wine, before walking back to the apartment to crash out. 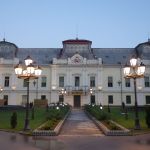 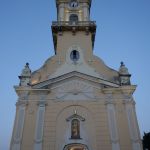 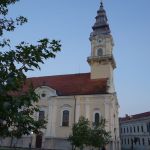 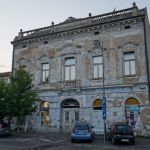 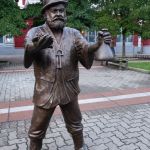 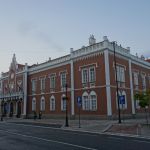 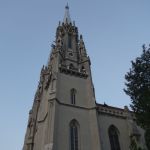