It was 36’C at 9am when I got on the bike to leave the guesthouse this morning.  Fortunately as the road headed up into the mountains, it cooled slightly.

The road followed the edge of Toktogul lake, the magnificent blue water kissing the edge of bare rock cliffs, I was stopping for photos every few minutes.  At one point I turned off the road and down a dirt track, in order to get a better view of the lake.  It was a narrow trail and I came head-to-head with a tractor, a man and his wife in the cabin, his son & daughter in the trailer with a large load of watermelons.  They were just as surprised to see me, as I was surprised to see them.  As it was a steep downhill slope, I couldn’t back up, and with his trailer of melons, it would have been a challenge for him also.  I rode the bike into the soft dirt slope, giving him just enough room to pass by me, but he stopped right alongside, as he wanted to chat!  I fought with the bike to avoid dropping it, while he seemed so happy to see me.  He yelled out something to the two kids in the trailer, and moved the trailer forward so that the kids were next to me.  The little girl tried to give me a huge watermelon!! She struggled to lift it herself. With both my hands busy holding the bike, I couldn’t receive this kind gift, let alone even strap a huge watermelon onto the bike! I thanked them and said goodbye and they continued up the path. 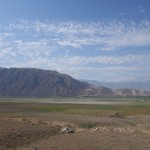 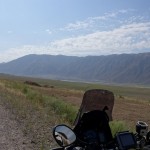 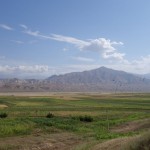 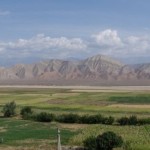 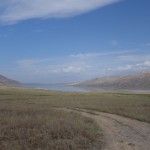 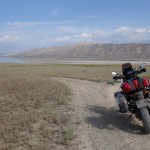 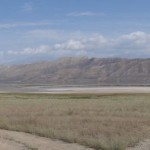 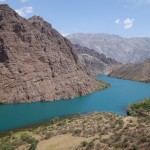 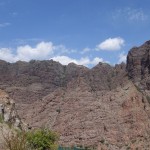 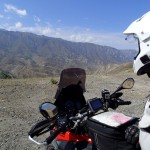 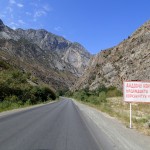 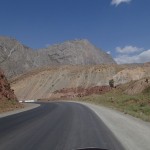 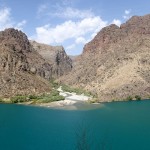 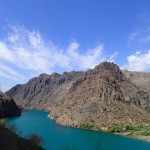 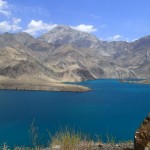 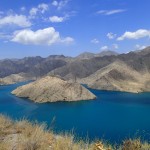 I spotted a roadside stand seeking samsas (samosas) cooked in a wood oven and decided to stop for lunch. These flavor filled balls are almost like a calzone, hard crusty shell with vegetables, a small piece of lamb and a huge chunk of fat inside each one. Animal fat is supremely prized here, more so than lean meat, which is considered a cheap cut. The balls of fat are full of flavour, but a challenge to stomach when you are not used to them. I had a short sleep in the shade on the tea platform before riding on towards Osh. The border between Kyrgyzstan and Uzbekistan weaves around, and I was forced to make numerous detours to avoid crossing into Uzbekistan, as the major routes transit across borders. As I only have a single entry visa for Uzbekistan, this meant an additional 120km ride, skirting the razorwire of the border. 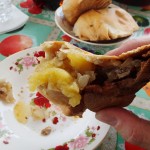 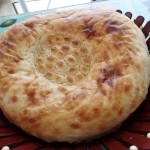 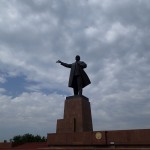 I arrived in Osh at around 5pm, settled into a hotel and took a walk around town, inspecting the market and park before heading back to do some administration planning and rest.