The plan for today was to ride to Siem Reap, with a small diversion to Sambor Prei Kuk temple.  The Sambor Prei Kuk temple complex was built 400 years prior to Angkor Wat, so it seemed very appropriate to visit and take a look before heading to Angkor.  It is also fairly remote and not much visited by tourists, so that was some of the attraction also.

It turned into a fairly challenging day.  Heading out of town it was cool and the road good.  The GPS and map indicated it was only approximately 50km to reach the temples, with a little bit of laterite road on the way.  Coming to a junction that wasn’t marked, I had to make a decision, follow the GPS or faff about and try to figure out if this was the place to turn based on a poorly detailed map.  I trusted the GPS.  That turned out to be a bad call.

The dirt rode narrowed and the surface became a little potholed, then a supremely dark cloud appeared, and it started to rain.  No bother, I thought, it will be nice to cool off a bit in the rain.  When the lightening and thunder started, I pulled up under a tree and put the wet weather pants on, more so that my boots would not get filled with water.   Then it really started to rain, absolutely pelting down.  I thought about parking under a tree again for a bit, and waiting it out but soldiered on.  While focused on the rain, I had failed to notice that the track had narrowed and the surface was getting worse.  Then there was a section of sand, I hate sand on a heavy bike.  But from where I was sitting, it looked like it was only a few hundred metres of it and then the track appeared to returned to dirt so I powered into it.  It was an illusion though, and the sand continued trying to break me.  I was actually thankful for the heavy rain, as it was helping to firm up the sand.  As for the mud, the rain did nought to help from sliding everywhere in the mud. 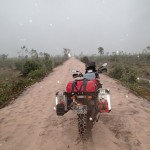 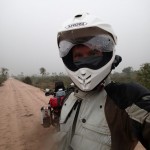 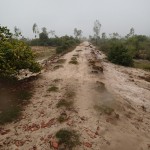 Then the road got progressively even worse.  Alternating sections of deep beach-like sand, or stretches of slippery mud.  The track seemed to be built up from the floodplain by piling sand to form a ridge to travel on.  Good in theory I guess, as water can run off easily, but not so fun to ride.  I nearly came off half a dozen times, mostly in the sandy sections.  It was hard, hard work keeping the fully loaded bike upright.  At one point, I stopped to reassess the situation as if the track got any worse, and I dropped the bike, in the rain it would be a real struggle to get it back upright, and that was assuming I didn’t go off the side of the embankment. Going off there and I’d be walking to the next village to find help.
I thought maybe it would be best to turn around.  I estimated I had ridden in about 4-6km, although it looked like the temples were only another 4km ahead.  So after letting some air out of the tyres to help with the deep sand, I decided to continue, hoping for the best and that the track would improve.  It didn’t, but I managed to come out the other side, where the goat track I had been travelling on, met with the road I should have been on.  It now appeared that the GPS had sent me down a disused and unmarked track, rather than along the graded road.  It was a good lesson to learn, and I hope not to make the same mistake again.

It had taken more than an hour to cover about 8km down this path, paddling and wrestling the bike through sand. 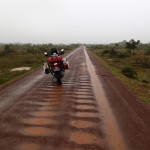 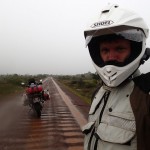 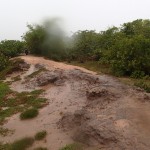 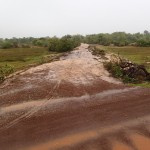 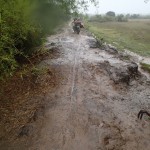 After 10 more minutes riding along the road, I reached the temple area as the rain eased up slightly.  As I was soaked anyway, I walked around the temples, the only human in sight, with frogs jumping away as I splashed through the puddles.

It is amazing to see these huge structures in the jungle, with the jungle progressively eating up the buildings and tearing them apart slowly.  So much work had gone into building these structures 1000’s of years ago and now the jungle is reclaiming them. It would have been a very interesting place when it was a thriving city. 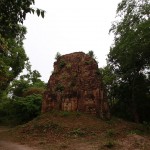 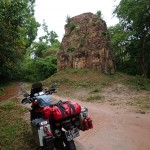 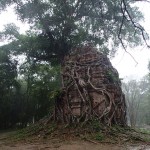 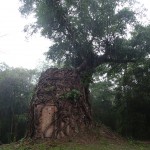 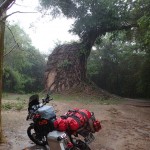 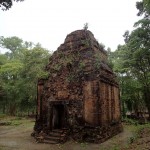 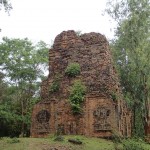 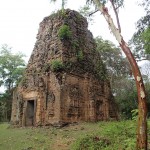 On the way out from the temple area, I stopped at the first village and bought some water from the kids selling by the side of the road.  I tried to reconfirm the correct direction to travel, but no-one seemed to know the name of the next major town, 80km away.  This seems to be a common theme in Cambodia, presumably people do not travel far from their local area.

Cambodian people are surely some of the most polite and gracious people.  It is such a great amount of fun travelling here, kids run out and wave hello, adults always welcome me with a smile, stupid questions I pose are always answered gracefully and with such kindness I don’t think I have experienced anywhere else. They really are the most genuine and nice people.  I wonder if the turbulent history of the country plays any part in the positive and cheerful Cambodian outlook today.

At the next junction I saw a shop with a compressor out the front and stopped there to pump up the tyres, as usually the guy there was very kind, offering me his seat and trying to make me as comfortable as possible while inflating my tyres back to road pressure.  By this stage I had become quite wet and cold, and regretted not putting the full wet-weather gear on earlier.  The air temperature was now 21’C, and with the wet jacket working as an evaporative cooler, I was getting chilled on the bike. Turning the heated grips on helped stop my fingers from turning blue.

I rode into Siem Reap town and stopped to fill up fuel and access wifi from the petrol station, free.  Amazing that Thailand and Cambodia can give out good, free wifi at petrol stations, yet hotels in Australia still want to charge like wounded bulls for the same service.

Tonight I’ll head off to see the sunset at Angkor Wat, before spending a few days exploring the area. 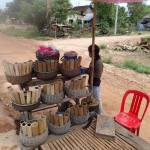 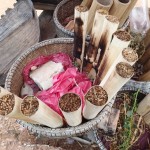