I got a call early in the morning, confirming that the replacement stator had arrived and was ready for me to install, so I checked out of the hotel and took a cab back over to Fins Motorcycles, where the guys welcomed me back and provided me a space in the lane beside the workshop, where I could work on the bike.

I had hoped I had all the tools I would need in my travel kit, but it soon became apparent that I was missing an 8mm allen key, to remove the crash bars, and my 3mm one was so damaged as to be unusable when I needed it also.
Fortunately the guys at Fins provided me with these, along with a torque wrench, loctite, tape, soldering iron, multimeter & side cutters.  The job would have been near impossible without these tools, and while it’s not possible to carry everything, I committed to buy some proper allen keys, even thought I’m very close to Ireland now.

After removing all the necessary components from the bike, and inspecting the old stator, it was obvious why it no longer functioned.  It was burnt to the point of being black, charred bits of lacquer inside the drum.
After cleaning everything up, I started reassembling the new stator, but found the leads on the replacement stator were too short, hence I had to do a bodgy job, chopping the old leads off and soldering them to the new stator. 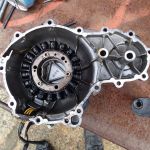 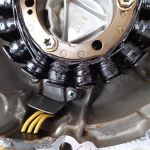 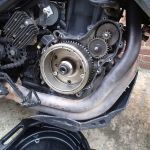 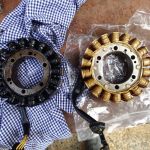 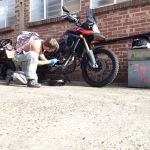 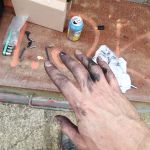 Once it was all reassembled, I started the bike and reassuringly found the battery was now charging correctly.  Chuffed, I cleaned up, put the plastic panels back on the bike, packed away the tools and prepared to leave.

As I was doing so, it just so happened that a tool salesman walked past, and said hello, asking about my trip.  After I’d explained the journey, I asked him about his tool business and if he could sell me some allen keys.  He soon returned with two kits, and I bought the smaller one from him, right there.  Very fortuitously.

With the bike now ready to go, I said goodbye to the lads at Fins, we had a few photos and I rode out the gate as it began to rain, again.
Given it was already late in the day, I searched for a guesthouse and found a great little place not too far from where I’d stayed the previous two nights, and after checking in, headed to the nearby pub for a meal and a cider. 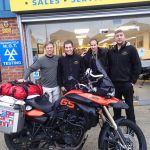 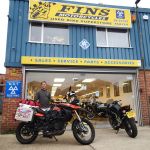