Last night was probably the worst hotel I’ve stayed at in China (so far).

It was a family guesthouse, and while the proprietors were friendly, it wasn’t a great place.  The bed was covered in pubic hair before I even entered the room, the hot water didn’t work, and the bed was literally a piece of plywood with a sheet over it.  I slept ontop of the blanket, in my clothes, just to get a little more padding.   At 5:30am the owner lit up a cigarette next to the window near my head, and then proceeded to crush all the aluminum cans and PET bottles.  About 1M away from my head, with only a flyscreen between us.   Good morning!   Once the many cans were crushed, the courtyard was swept, stirring up the dust into a nice cloud that settled on me where I lay.   At 6:30am I decided I might as well get up and have a cold shower.

Breakfast was Tang Yuan, which is fermented rice and egg soup.  I quite like this for breakfast now, it is slightly sweet and has the mild taste of baiju or rice wine, from the fermented rice.

The ride was the usual boring industrial towns for the most part, interspersed with occasional cities with choking traffic and drivers that dangerously cut you off just so they can get a closer look at the bikes, or a photo.   At every stop there are always at least 4-5 cameras that appear and photos are taken, some people try to do so surreptitiously, and a few ask, but most just shoot.  There literally are thousands of photos of me and the bike in China now. I don’t know what people do with these photos of the strange foreigner. 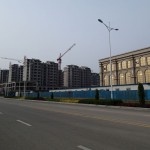 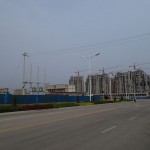 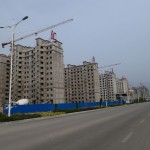 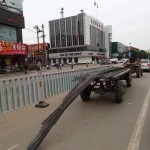 At lunch today, which was a delicious spicy beef noodle pot, the waitress pushed her two little kids to have their photo taken with me.  The kids were a bit apprehensive to begin, but with some encouragement from their Mum, they decided to join me for a photo with the bike. 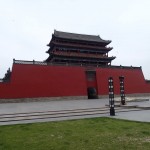 In the afternoon, we made it to a section of the Great Wall located in Shanxi province.  This section has been repaired by the government and was very scenic, although I did not climb the whole section as I wasn’t feeling tip-top, after lunch.  I had a few stomach cramps and was keen to stay within close range of a suitable facility, should it be necessary.  As it turned out, I was fine, the pain went away and there was no sprinting for a toilet necessary. 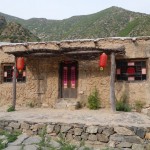 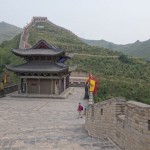 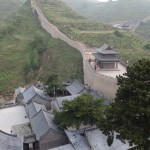 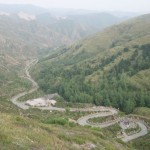 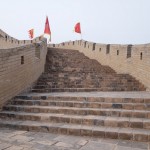 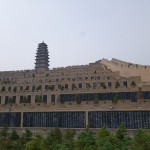 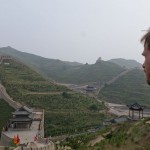 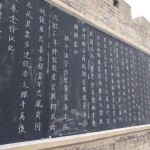 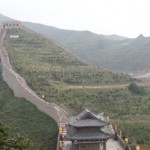 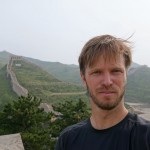 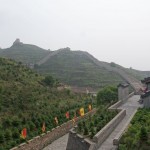 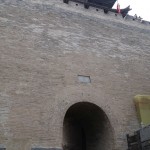 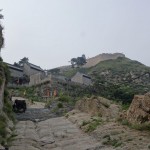 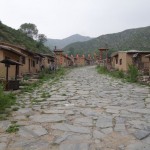 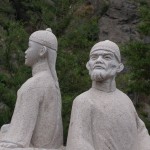 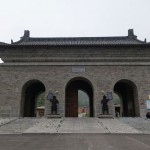 Riding into Daiyuan, yet another town that is under the massive Chinese growth spurt, with huge blocks of apartments under construction.  I don’t know where they will find the people to fill these buildings.  Apartments, factories, sport stadiums, offices, all brand new and being built at the same time.  Its like SimCity, entire cities just pop up in short order.

Just as I was leaving the hotel for dinner, the local constabulary showed up. They had been called by the hotel, to come in and complete the paperwork to register the foreigners.  Two cops, and one girl from the military.  One of the cops spoke a few words in English and the girl knew how to write latin characters, sort of, so she had the job of filling in the “Alien Registration Form” transposing data from my passport.  It was a lengthy process as she was certain to ensure everything was absolutely accurate and correct.
While this was going on, I tried talking to the cops and they to me.

The best line one of the cops came up with was “You look like David Beckham, you very handsome”

I managed to convince them to join me for a photo, and then jumped in the cop car for a photo in the drivers seat.  They thought that was very funny, although the security and hotel staff seemed to indicate that was maybe going a bit too far, but the cops were happy, even taking photos of me in the cop car on their mobile phones. 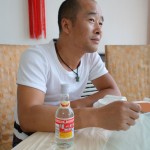 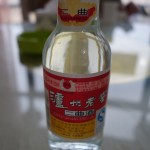 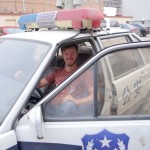 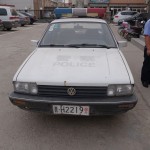 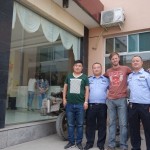 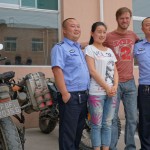