Riding towards Ashgabat was probably the most boring place I’ve ever been. The road boring, the scenery, nothing.  I can usually see some beauty in even the most plain desert, but in this case there was nothing.  Complete and utterly boring.

At some point, I looked down and happened to notice that the shadow of the bike on the road, looked different to usual.  It’s funny how such a small detail is noticeable after so many months looking at the same thing.  I pulled over to find that the brace tube between the panniers, had snapped. The tube had been rubbing on the tyre, it was lucky I stopped when I did.

I jury-rigged it back in place using a strap for the time being, and need to find a welder to fix it, as a priority now. 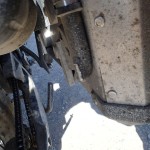 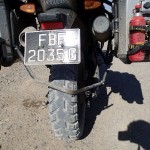 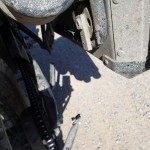 Back on the bike, more of the same boring road. The temperature hit 40’C, as I barreled along.  Despite this being not the most pleasant environment, I tried to see it symbolically, celebrating my 40th birthday, sitting in 40’C heat. 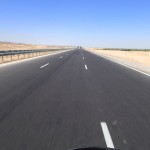 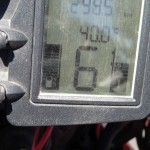 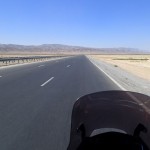 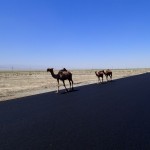 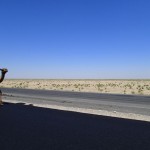 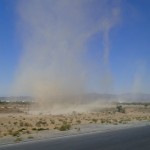 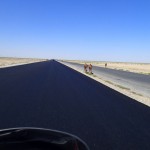 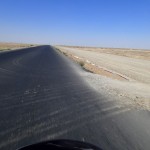 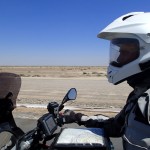 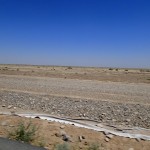 A cop tried to pull me over, yelling and waving his baton enthusiastically at me.  I would never have ignored the direction of a police officer in Australia or Singapore, and I’m not sure how wise it was to do so in Turkmenistan, but I opened the throttle and fixed my gaze straight ahead, powering away at 130k/h.
I learnt in Tajikistan, if you make eye contact with the cop, he’s got you.  So I made a habit of either hiding behind another car when I saw a cop, or simply turning my head, and looking backwards while riding forwards.  It often worked.  It was sort of like playing “you can’t see me!” with children, hiding behind your own hands.  Crazy, but true.

I arrived in Ashgabat completely shattered. The heat had taken its toll on my body.  I cut at least 3 laps of the city, trying to find a hotel, everything was booked out.  Finally the Hotel Nissa agreed to take me in, at a rate of $145!  But I figured, screw it. It’s my 40th, spent in the whacky country of Turkmenistan.  The room is super lux, huge, with a stonking hot shower and it is one of the very few places in Turkmenistan that knows of the Internet.  Everywhere else internet access is prohibited.  Even here most sites are blocked.  A VPN solved that little problem.

I headed out for what is probably the best shashlik of the trip to date.  A few beers in the garden to celebrate.  In just two days, I’ll be in Iran, and a completely new discovery of cultures and experiences.  Not too far to Europe now.