After a very unusual breakfast, (to my taste) that consisted of a type of course porridge, with alot of condensed milk, I packed and headed west, following the edge of lake Issykol towards Balykchy.

I was enjoying the ride when I crested a hill on a curve and spotted the cop car, and the cop holding the radar gun, hiding in the trees. My immediate thought was, “oh no, hear we go again, I’m going to get fleeced”
The cop waved me down, and I stopped near the cop car, dismounted and said “assalam”, shaking hands with all three cops.

They showed me the radar gun, that indicated I was doing 80kmh, and showed me that the limit was 40kmh, which seemed like BS, but I wasn’t able to argue. They asked for my documents, and I gave them my passport, but that wasn’t what they wanted. They wanted my drivers licence, so I handed over a dodgy copy of my Australian licence, made on my friend Michael’s inkjet printer!  which seemed to be sufficient to them. I was shown a table that stated my crime carried a penalty of 2000 som, and they pulled out a credit card machine! I offered 500 som, and the big cop countered with a bid of 1000 som, to which I said no, and I sat down in the back seat of the cop car, demonstrating I could wait, all day if necessary. They seemed ok with that, and we sat in silence for about 3 minutes before the big cop told me I could go. “Davaii! Davaii!”. Waving me away. I told him, “I’m not going anywhere without my documents!”. And he handed my passport back. I then asked for my licence, and he handed that back too. Thinking we were done, I got up to leave, and they all said in unison “no, no, no!”. And made the fingers rubbing together action, of money.

I gave the big cop 360 som ($7). Massively overpaying, as I saw a local guy hand over 100 som. They all were happy and we shook hands and said goodbye. As I got back on the bike, I figured I’d paid, and deserved a photo, so snapped a quick shot of these dodgy characters. This upset everything. I was called back, and they all got very angry. Voices were raised and we ended up arguing.

I lost it with them, and said “ok! Let’s call my embassy!!! You clowns wanted me to pay, you got my money, I deserved a photo. I’m calling the embassy, and you can sort it out with them” It was probably good that we didn’t understand each other completely.

I walked back to the bike and took out my phone. That’s when the calmer of the three cops came over. I said to him, “Are you sure you want me to call? It’s probably going to end badly for you”

He indicated I shouldn’t call, and just show them the photo instead. I pulled out the camera, and they made me delete the offending photo. I knew full well I could undelete the photo later anyway.
Then they browsed through the last 3 days worth of photos. They were now all smiling, happy and loving seeing my photos of their country”. We all shook hands and said goodbye, friends again. 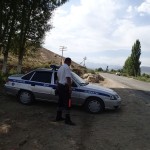 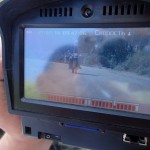 I find this entire charade laborious, the acting angry, threatening, and then, all of a sudden, friendliness. Of course I’m playing the game too, but how can they expect me to believe the warm friendly smiles, when they are only linked to the success of a commercial transaction.

I rode onto Bishkek as the temperature hit 36’C, stopping at Fatboys Cafe, where there was Wi-Fi. The waiter Tilek, and the owner Chris, helped me find an apartment nearby for a good price, so I’m now settled into an old Soviet apartment block. The apartment consists of a single room, with a bathroom and small separate kitchen. It should serve me well for the next three days while I arrange visas to Iran & Uzbekistan, as it is walking distance to both embassies.

A very dodgy set of electrical wiring completes the building.  It looks like somebody has been stealing power from the board. 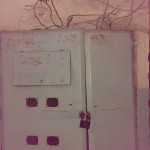