An early departure from Klong Yai meant a very enjoyable ride down to the Cambodian border town of Koh Kong.  The air was a cool 28’C at 8:00am and the road swept beautifully along the coast and through the narrowest past of Thailand, where Thailand and Cambodia meet. 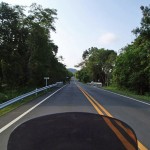 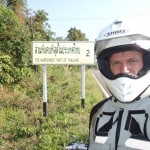 On arrival at the border, paperwork was processed reasonably swiftly, although the girl at customs didn’t really know what she was doing.  After visiting three different windows, and having my passport stamped out of Thailand, I was given a laminated pink piece of cardboard by one person at customs, then told to move my bike 3M forward and gave the pink card to another guy, standing next to the first guy now. Then I was told I was free to go, and I rode into no-mans-land between the two borders. 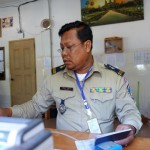 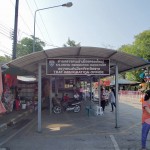 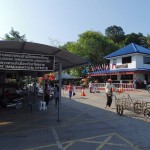 The border was surprisingly busy, mostly with people pushing huge carts full of durian from Thailand into Cambodia, and then returning with the empty carts.

At the Cambodian side, I was told to leave the bike parked in no-mans-land and go do my paperwork.  First to apply for a visa, for which I had forgotten I’d need a passport photo, so walked back to the bike in the hot sun.  After the visa was issued, then it was to the immigration office to get my passport stamped and all my fingerprints taken.  The immigration officer here was the friendliest chap of all the officials I had to deal with this morning. 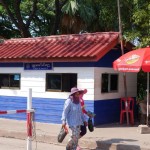 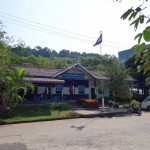 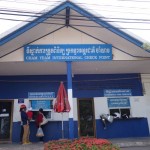 With my personal items sorted, it was then off to figure out the bike import with Cambodian customs.  I handed over my Singapore registration documents, and the customs official looked them over carefully. The young guy in the customs office was helpful and cheerful, but said, “the only document I can stamp, is one of these” holding up a carnet. “Do you have this document?”   To which I could only say “No, I don’t”   He then asked, holding my papers “Which country is this document from?”  Me, “Ahh, Singapore”

I said, “OK, Aw Koon, Thanks” and headed back to collect the bike.

Near where I had parked there was a guardhouse, and the guys there waved at me to pass through under the boom, but to come close to the guardhouse window.  When I got there, one of the guys said “Passport?”   I started getting it out, and then he said “No, no, bike, papers”   I told him “The customs guy there said I don’t need any papers, and I can go”    He said, “That’ll be 100 baht”    He was nervous, and I had an idea of what was happening here.   I said to him, “Sorry, but I only have 60 baht, will that do?”  Holding up three 20 baht notes.   He responded, “Yep, that’s ok” and took the three notes from my grubby hand, passing one each to the two other guys in the office, right in-front of me.    Ahhhhh.  I was half pissed off, but at the same time just wanted to go, as I was dripping sweat after carrying my jacket & helmet between different offices for the last 30 minutes.   I said goodbye and got on the bike, now riding on the other side of the road for the first time since leaving Singapore.

One kilometre later, there was another checkpoint, I was still in the border zone, and as the cop flagged me down, I thought “Here we go, all these guys are probably on the take and will want a piece of the action.  Maybe the border even radioed ahead to look out for me”  But they just waved me through.   Then another 2km later, another checkpoint, this time the cop asked for my passport and checked the visa, but no request for any tolls/fines/processing fees, and I was on my way.

I rode through the small town of Koh Kong near the border and then it was onto the open road in Cambodia.

The scenery was very beautiful, with mountains and sea both visible from the road. The road itself though, was a complete change from Thailand.  It started out as regular large potholes, but soon degenerated into complete offroad sections where they had started tearing up the road.  It was down to a single lane, with trucks coming the opposite direction stirring up dust clouds that obscured the scooters and other objects on the road.   Once through those sections, riding through the small villages was very nice, apart from the numerous animals, children and scooters that would dart out at the last minute from between the trees.  The worst were the cows and buffalo, that seem to just move out onto the road, perfectly timing it to force me to stop.   Pigs & dogs also had the same amazing sense of the worst possible time to step out. 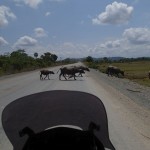 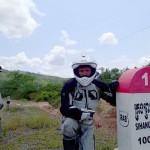 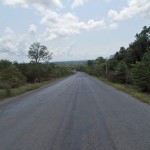 I was getting low on fuel and spotted a proper service station when I only had about 20km range left.  Pulling in I realised I had completely forgotten to get some Cambodian currency when I crossed the border.  I showed the pump attendant some Thai baht, hoping they would accept it. “No” was the answer.  Uh oh.  Now I was in a small village, with no fuel and no ATM anywhere in sight.  I rode up the road a little further and spotted a shack selling mobile SIM cards.  I asked the guy if he would change some Thai baht for Cambodian Riel.  Surprisingly, after a bit of hesitation, he said yes.  I was thinking the rate would be terrible, but at least I could buy fuel, but the rate was almost as good as the bank. The difference only amounting to about the cost of a can of Coke.

So with my changed cash in hand, I rode back to the petrol station and asked the guy to “fill it up”   There was a discussion about what type of fuel should be used, and eventually a girl who spoke English came over and said “SUPER. 97”  I asked what the other pump was, and she said “91”   “Ok. SUPER it is then!” 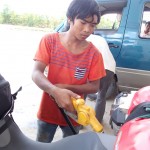 After filling up, the total on the pump said 18.9.  I figured this meant 18,900 and they had dropped the zeros as it was impractical. I handed the guy a 20,000 note, and the look on his face indicated something wasn’t right.  The girl came back over and took her calculator and multiplied by 4000.   75,600 riel, was what I was supposed to pay. I handed over 80,o00 and everyone seemed calmer.

Fueled up, I rode off, and then it dawned on me.  I had forgotten that Cambodia has a strange dual-currency system, they use both the Cambodian Riel and also US dollars, interchangeably.  I don’t know why had forgotten this important fact, but I had a fistful of US dollars in my wallet, and I could have used those to begin with.

I rode the remaining 100km into Sihanoukville at ease, avoiding the wandering animal life and crazy drivers in overloaded vans.  The villages I passed through were very interesting, as the small timber shacks on stilts were usually presented with obvious care.  The dirt infront swept and manicured.  But strangely, as soon as the clean house area ended, there was trash and rubbish dumped everywhere.  Obviously the Cambodian’s have a strong sense of personal pride in their homes, but a huge littering problem that perhaps reflects a sense of missing civic pride?

Tonight I’m in Sihanoukville, which is very much a traveller town.  The town is dotted with restaurants and bars to serve that clientèle, all along the beachfront.  The other sign of a tourist town is the constant call of “Tuk Tuk, Weed, Tuk Tuk, Hash” that comes from every corner as I walk along the streets.

Still, yet another brilliant sunset to end the day. 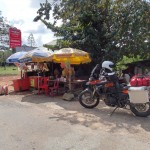 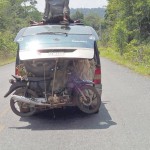 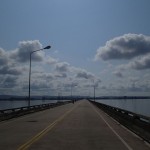 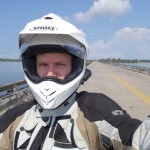 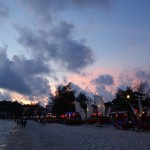 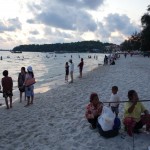 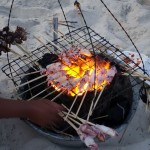 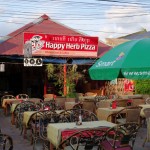 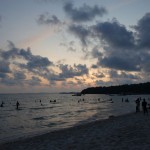 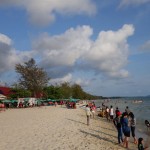 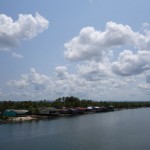 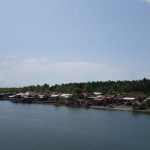