Last night the hotel arranged for the bike to be parked inside a shopping mall.  I rode up and into the mall, parked next to a small store and the mall was locked up from 6pm-9am.
So after loading the bike, I started up the engine, ready to head for the border, but the engine misfired repeatedly and wouldn’t run. It was only firing on one cylinder.  I sense of dread crept over me, as we had a deadline to meet Chinese customs and exit China at 9:30am, and the last thing I needed was a bike problem entering Mongolia.  I managed to keep the engine running and gave it a big rev, which seemed to fix whatever the problem was, and the engine ran fine all day.  Perhaps a little bit of water or dirt in the fuel, highly likely with all the teapot fill-ups in this dusty environment.

On the way out of Erenhot town, we had to stop at two different customs buildings for paperwork, before heading to the actual border, where we went through another customs check, the chassis number was checked against records, before heading to immigration to be stamped out of China.  Then I rode the bike another 20M forward and was then stopped by another border control official, who wanted both panniers opened, only to look at the top of the zipped bags, check my passport, and finally was given the all clear to leave China.  O started the bike, rode around the building and about 100M where suddenly another checkpoint appeared, manned by two young guys in uniform.  They forced us to stop and both looked worried.  They said something I couldn’t understand, and spoke into their radios to someone more senior.  They were insistent we were not going anywhere and told is to push the bikes to the side.  They appeared to be completely confused and didn’t know what to do with us.  After some minutes, a bus driver came over and told us to show them our passports, which I did. They didn’t even look in the passport, and suddenly we were allowed to go.  Bizarre, but out of China and now in no-mans-land. 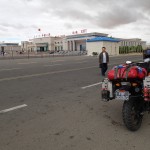 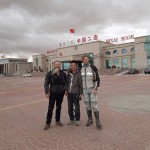 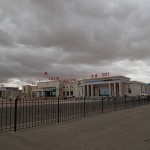 200M further on was the Mongolian border, I rode up and immediately a middle aged lady in camouflage army uniform approached me, and in English said “Welcome to Mongolia, where have you come from and where are you going?”.  To which I said “Hello, I’m coming from China and going to Mongolia”.  I thought it a bit stupid stating the obvious, but she said “Ok, good”  and then proceeded to explain the four steps I would be required to compete to enter Mongolia, and checked with me that I understood.  What a change from China!  The four steps were simple and logical.  1) Complete bike registration 2) Immigration 3) Customs 4) Quarantine.  Hand in the slip of paper from step one at the end and you are free to go.  Simple.  The small slip of paper was stamped at each stage and every official smiled and was helpful all the way through.  So painless, and the customs girls were all very good looking which made the process just that little bit more pleasant.  20 minutes later, all the steps were complete and I rode out onto Mongolian roads.

We stopped briefly at a restaurant in the border town and I was amazed at just how European everything has become.  The food, items in the supermarket, architecture, personal interactions with people, were now all very Russian.  Only an hour earlier I was standing in what was very much China and Asia, and now, 5km down the road feels like Eastern Europe.  Apart from the landscape, which is sandy and dusty here in the Gobi desert.  After I finished my potato soup and a piece of chocolate torte, I rode out and to the north west.  But the road/track was sand and getting deeper, huge potholes and often the track disintegrated into 4 or 5 tracks, impossible to tell which was the right one. The lady at the border said there was a good road, and if this was her idea of ‘good’, I hate to think what a bad road would look like for her.  After about 10 minutes, I finally spotted a tarred road running in the same direction and hopped up onto that.  Beautiful tarmac leading through the desert, now I was making good speed, and the scenery amazing, although it was cold on the bike, and windy again.

Passing through empty rolling hills, occasionally sheep or cattle strayed onto the road, there was very little traffic and those few people I did see, always waved and smiled. 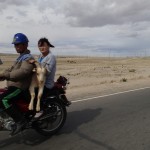 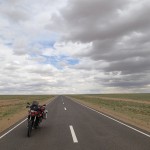 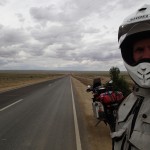 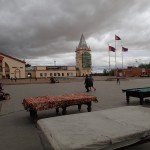 I arrived in Sainshand at 4:30pm, refueled and found a hotel, they served up a great steak and potato dinner from the Mongolian menu and I’m ready to sleep early, at 9pm.