I left Durkerque at around 9am, into absolutely foul weather, drenching rain and wild winds.  The ferry check in was due to close at 9:15am so there was no time to waste, and I powered toward Loon Plage port.  I had not realised that the port was much further out of town than I had expected, and by the time I reached the ticket office it was 9:55am, and I figured there was no way I could catch the 10am ferry. 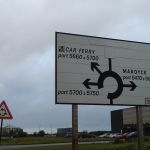 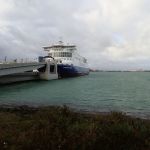 But the girl at the ticket office told me if we rushed, she could sell me a ticket and I could still make the 10am departure.

So after paying the E45 fare, I made my way through French immigration and onto the immigration window of Great Britain, where I received the most comprehensive questioning I had received at a border in a long time!   It started when I handed over my passport, with “Oh, so you are Australian.  Why are you coming to the UK?”  “Do you have a job?”  “When are you leaving the UK?”  “Do you have a flight booked?”  “You know we have alot of you Australians in the UK”  “Are you going to look for a job in the UK?”  “What are you going to do with the bike?”

This went on and on, and I feared I would miss the ferry.  I finally told the guy that I also have an Irish passport, to which he said “Well, I’m holding an Australian one, so you are Australian as far as I’m concerned”    He was correct of course.

Eventually he decided he was satisfied with my answers and let me go on to board the ferry.  The ferry trip was uneventful, apart from the fierce wind blowing the huge ship around.  On arriving and passing the white cliffs of Dover, I returned to the bike, loaded up and rode off onto the left side of the road, into Great Britain. 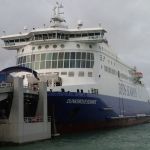 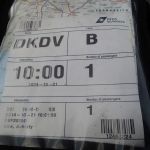 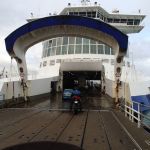 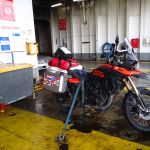 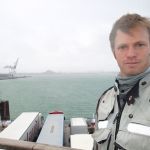 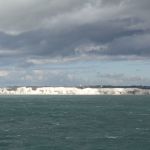 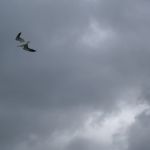 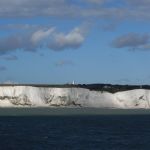 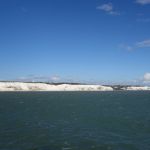 Riding up the highway away from the port, the wind was absolutely vicious, blowing me all over the road. I made a short stop for ‘Bangers & Mash’ for lunch at a highway roadstop, before continuing in the wind and rain along the M25.

I happened to glance down and notice the major fault light illuminated on the dash, and thought that strange, so pulled over and checked everything obvious, before continuing.  A few miles later, all the lights on the dash went out, followed by the speedo & tacho.  The engine was still running ok though, and I continued, thinking to exit the highway at the earliest opportunity, but a minute later the engine just stopped and I rolled to a halt, just near an overhead bridge.   I pushed the bike uphill the last few meters to a safe area and started pulling the plastic off to check the battery, as it begin to rain again.  The battery appeared fine, and I suspected that the stator or regulator had failed. 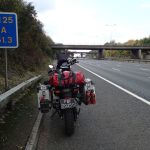 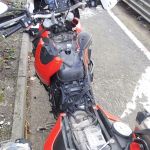 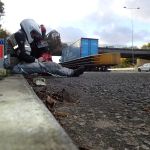 Sitting in the gutter by the freeway, a motorcycle cop rode past, looked directly at me waving at him, and rode on straight by.  I’d hoped he would stop to check I was ok, but I guess that’s what different about being in developed countries, everyone minds their own business.  In the two hours I’d been stopped by the side of the road with my stuff spread everywhere, thousands of cars & bikes passed by, but no-one had stopped.   If I’d been sitting by the roadside in Iran, Tajikistan or Thailand, by now I’d have been showered with dozens of offers of help, and would probably be sitting down to a meal in a strangers home, a gesture of kindness that we rarely experiencee in England, Australia or Singapore.  Not that I ever expect this, it is an observation after many months of overland travel and again I committed myself to living that way, offering help to strangers as so often has been shown to me over the past seven months.

After messing around for 40 minutes with the phone trying to get a data connection, eventually I called for help, ringing BMW who told me they could not help, they could only refer me to BMW Singapore. Very helpful. They did give me another number for AA roadside assistance, and after calling AA, they gave me a quote of 120 pounds to move the bike to somewhere else.  But the lady on the phone was very helpful, and rang around some motorcycle repair shops for me, eventually locating Fins Motorcycles, who sent a guy to come and pick me and the bike up in a ute.

Back at the Fins workshop, we did some quick checks and confirmed, the bike was not charging and hence probably the stator was dead.  As it was already after 6:30pm, the lads at Fins found me a hotel, locked up the bike and dropped me off at the hotel for some rest.  Absolutely top guys. 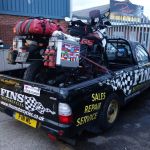 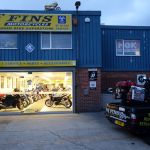 Tomorrow I’ll look into how to fix the bike, given it probably needs a completely new stator.  It will delay my progress, but such is riding a motorcycle across continents, all part of the adventure.