I was up and active early with a little nervous anticipation, as I needed to visit the Uzbekistan embassy this morning.  As is my usual modus operandi with embassies, I had already cased the building on Monday (when they were closed), so knew it would only take ten minutes to walk there.  On approach, it appeared that they were open, but not taking appointments until 10am, so I went for breakfast, returning at 1015, to find four other people waiting outside.  I waited until they had all left, and made my way inside the office of the consul.  She was in a completely foul mood. Caustic. The conversation went as follows as I stepped inside.

She snarled a bit more, stapled all the documents together, and starting walking away, when I asked, fearing the response.

“The dates on the official Letter of Invitation… Do you think you might be able to be so flexible, to allow me to change them?”

After a quick discussion, she disappeared, returning 3 minutes later to say.
“Give me seventy-five dollars now!”

I handed over a $100 bill, and told her to keep the $25 and have a better day. I hoped this might break her bitterly cold demeanour. She softened slightly, but didn’t crack. “Give me $5, and I’ll give you back $30!”. She said.  I didn’t have $5, and this just further annoyed her.  Finally, and with reluctance, she accepted a few hundred som as substitute for the $5.   A few minutes later she threw my passport down on the table, and didn’t say a word.  It was open to the page with the newly installed Uzbek visa.  Score!
I thanked her repeatedly, and wished her day to be as excellent as possible.  I think she finally understood that I was being a little sarcastic, but if she’d smile a little, her day would actually be better.

I left the embassy, satisfied with the days administration completed, and returned to the apartment to back the bike.
I needed a nap and some lunch, and by the time I was ready to leave, it was nearly 4pm.

Riding out of Bishkek, the first 80km was on a very ordinary, busy road, with too much traffic, but once I turned south at Kara-Balta and onto the M41, the traffic dropped away and the road began to rise into the mountains.
Soon the road became steeper, and as I wound my way towards the two high mountain passes, the temperature dropped to 7’C.   At the first high pass of 3200M, I stopped to put another layer of clothes on.  Near the top, the road burrowed into a narrow tunnel.  There was a red traffic light at the entrance, so I assumed it meant the tunnel was one-way, but after waiting 10 minutes, the light had not changed, and only a truck was waiting.  Cars were still entering against the red light, and I decided to do the same.  I was about half way through the long tunnel when I realised the pollution was so bad, I’d become light headed and needed to get out fast. This couldn’t be good for a human body.  Two minutes later I emerged from the tunnel, in a cloud of pollution, and into the clean air. I stopped for a while, until I felt normal again, my eyes looked terrible in the mirror, pupils had become tiny black dots.
I was pleased to be out of there, and wondered what to do if there was another one of these tunnels, I didn’t want to need to do that again. 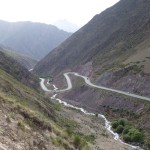 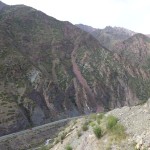 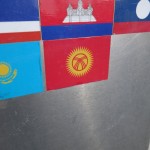 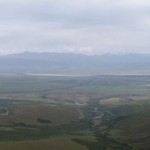 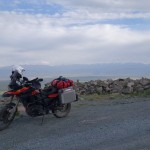 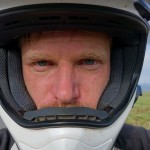 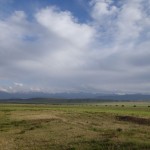 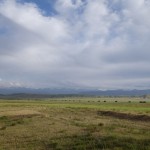 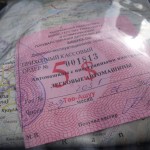 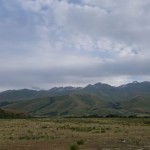 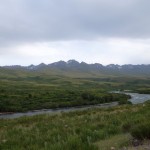 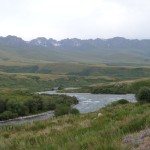 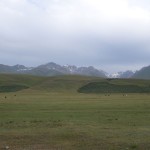 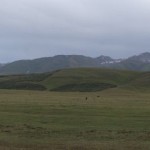 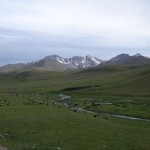 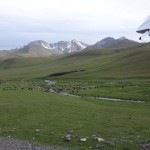 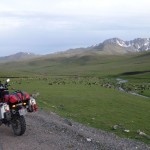 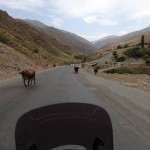 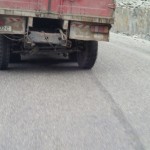 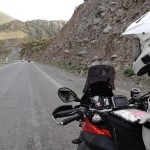 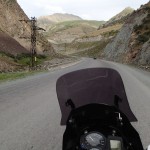 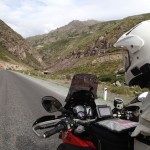 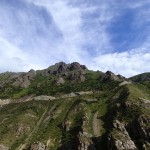 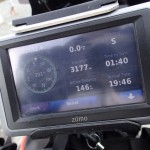 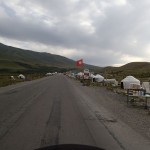 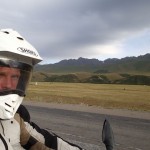 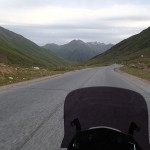 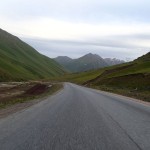 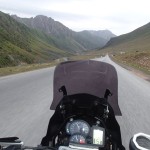 The view was unbelievably magnificent, snow capped mountains on both sides of the road, as I rode through a narrow green valley filled with yurts selling kummis.  Donkeys and horses grazed on the green grass, kids emerged from the yurts and waved as I rode by.

Eventually I descended, following the mountain river and reached the small town of Toktogul.  It was 8pm, and I was thankful for there still being some daylight.  I located a basic hotel with friendly staff, where I’m the only guest, and after a quick feed, I passed out for the night.