Today was a planned rest day, and for me it meant maintaince on the bike.  The tyres I’d been using since Singapore were near the end of their useful life, and Mongolian roads will call for something more aggressive, so it was time to fit new shoes on the bike.  The front sprocket and chain were also pretty badly worn, so those needed a change also.  I’d been carrying a spare chain and sprocket set from Singapore, so putting those on also removes a few kilograms of weight from the bike, an added bonus. Even though I could do all this work myself, I figured going to BMW Beijing to fit the tyres would be a good idea, as I hoped they had a tyre balancer.
So I rode across Beijing in the peak hour traffic, with only one close call when a muppet pulled out in front of me.  Arriving at BMW in the Chinese capital was bit of an anti-climax, I’d expected a flagship store, but they were located down a lane, and the workshop looked like it had never been cleaned, old parts everywhere, bikes in bits.  The only tools that appeared to get any use were the Big hammer and the Big screwdriver.  Not a good start.  The three guys there assured me they could fit tyres, and also agreed to let me use the workshop so I could do the chain changeover myself.

The mechanic set to work on the front wheel, while I got working on the sprockets.  The wheel was removed and the mechanic moved to the next room with the wheel.  After a 10 minutes, he still hadn’t come to get the new tyre from me, so I went to check how he was progressing.  What I discovered was a confused mechanic, trying to remove the tyre from the rim with the handle-end of a pair of multigrips.  I asked “Where are your  tyre levers?”.   “We don’t have any” was the response.   I went to get my levers from the bike, and when he looked at them and didn’t know what to do, I realised it was time to step in.  So the rest of my day was spent teaching a pair if BMW mechanics, how to change the front and rear tyre.
Once that was done, I got back to changing the chain and sprockets, with now three ‘helpers’ getting their hands in the way and generally stuffing things up.  Their general approach to everything was “hit it with the big hammer!”.   I decided to let them do the things that wouldn’t matter if they broke anything, like removing the old chain. I figured if they broke that, no harm done as it was going in the bin anyway… Although at some point my chain repair tool was broken, on its very first use!  So I resorted to using the angle grinder to remove the old chain, as I wondered how I was now going to fit the new chain without a working chain tool. 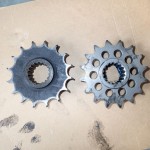 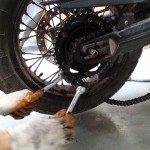 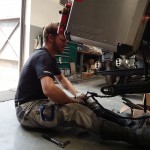 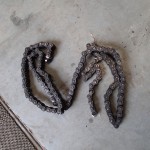 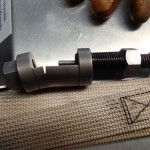 The helpers left for an hour, presumably for a cigarette, and I made great progress, although fitting the new master link was another hour of stuffing about with the borked chain tool and vice grips.  Finally the link was on and sort of adequately splayed pins pressed. 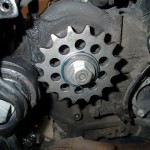 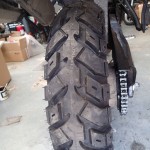 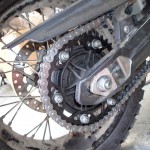 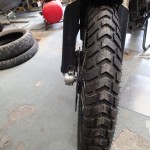 I was filthy, covered in grease and dirt.  I told the BMW guys that I would wash up and we could go have lunch together, but they had already bought me lunch, so we ate together in the courtyard.  I made some final adjustments, packed up the bike and my tools and took a photo with the BMW ‘mechanics’.    Unstoppable… maybe. 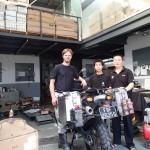 Back into the traffic to ride across to the hotel, and it was 4:30pm. I’d spent practically the whole day in the workshop.

My back was sore from leaning under the bike all day, and I was filthy dirty.  I showered and took my pants to the local laundry lady, who looked at them and I could see her wondering how to get them clean.  She also fixed the stitching on my rain pants and a Touratech strap that had frayed from rubbing on a sharp edge.  There was just enough time to walk back to the hotel for dinner with Mick, the guide and driver, before crashing out for the night. 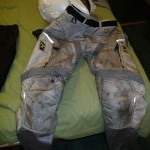 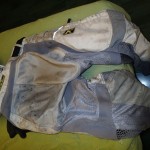 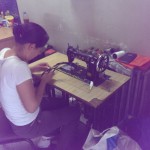